DID YOU KNOW… I do a weekly one-hour radio show? 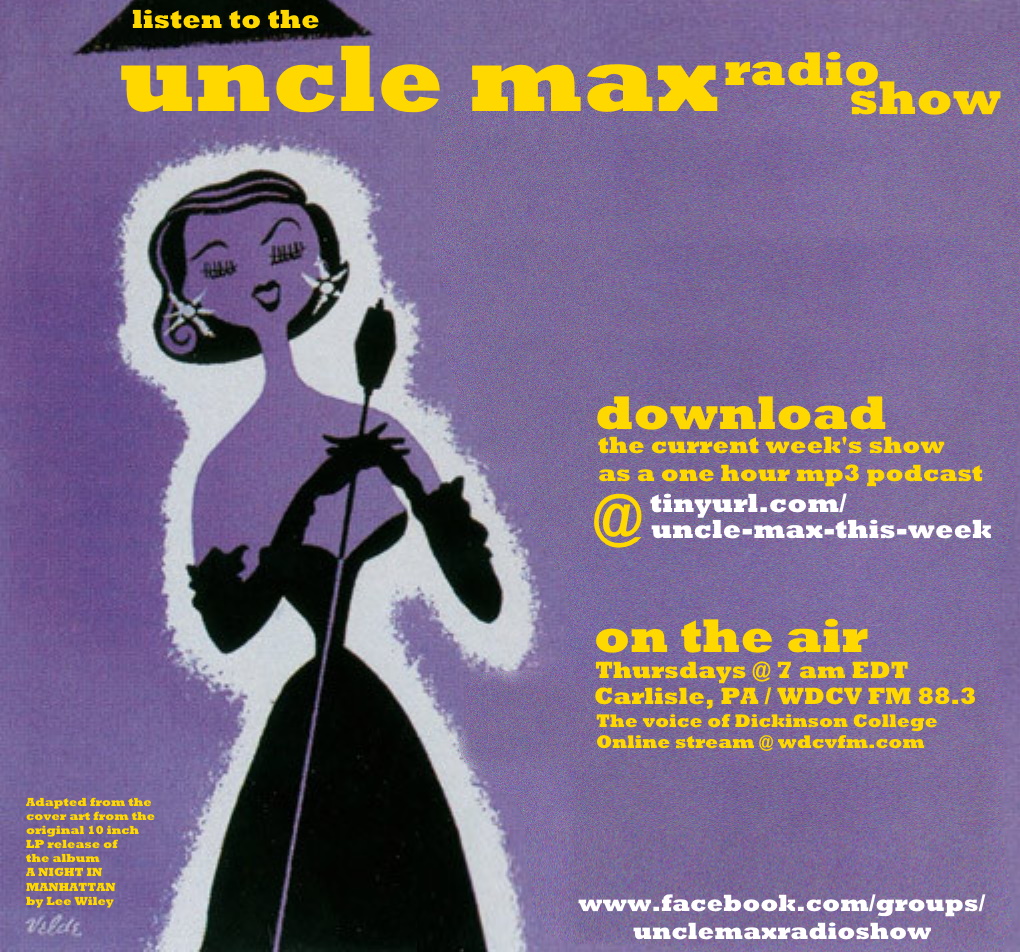 The Uncle Max Radio Show airs on WDCV FM 88.3, Dickinson College, Carlisle, PA, on Thursday mornings at 7 am eastern time… and yes, you can live stream it online… but you can also download each week’s show as a podcast. It’s an mp3 file, around 137 mb, and playable on most media players and other devices manufactured since the Clinton administration (so I don’t get to say “Thanks, Obama”). Click here to download the latest show, along with occasional bonus shows. And click here to see playlists, which I will start posting on this blog starting with the Thanksgiving 2022 show (24 November 2022 airdate). And click here, if you’re on Facebook (I am, too; what’s WRONG with us?), to join the Uncle Max Radio Show Facebook group, where past playlists and permalinks to past shows are archived.

I grew up in Carlisle, PA, and Dickinson College was the intellectual hub of the community (still is, in many ways), and WDCV was your typical small-college radio station. I think their signal was only ten watts back then– barely enough to reach houses in town off campus– and even though timeslots were at a premium and Dickinson students had dibs, I went to a meeting there as a townie– a high school student, no less! — and they told me that I had to have my FCC radio operator’s license (the FCC used to require all over-the-air broadcasters to have what they called a restricted operator’s license; they dropped this, along with other regulations, don’t get me started, in the 80s and 90s), but if I got that, I could go on the air.

I got the license, did the training, got put on the substitute list, and while I think I only ever did one or two airshifts, and I was high school kid awful– I remember playing “She’s Gone” by Hall and Oates and doing awful DJ banter afterwards (“That’s Hall and Oates, and she is definitely gone, one toothbrush hanging in the stand” etc etc) and, for some reason, the then-new single “I Still Do” by Bill Medley– that little bit got me hooked. A year or so later, I started taking broadcasting classes at the Harrisburg Arts Magnet School (where I did a half hour weekly show broadcast over a community station in Middletown, PA), and then went to Temple University for radio-tv-film.

Temple’s station, WRTI, was 24-7 jazz back then, and even then it wasn’t run like a traditional college station. I wasn’t interested in jazz at that time, and while I got on the substitute list there too, I actually had more airtime at WDCV during the summers of my undergrad years than I did as a Temple broadcasting student! This was mainly thanks to WDCV’s wide-open summer schedule. A couple summers in the early 80s, I had multiple shows at WDCV, including a three-hour show with an hour of Beatles, an hour of Beach Boys, and an hour of whomever I felt like featuring, plus a weekly all-Sinatra show. I can’t remember if it was “Friday with Frank” or “Sunday with Sinatra,” but I’m glad to see that the station still has a weekly Sinatra show, hosted by Deeg Giachetti.

About twenty years later, when I was married and living in suburban Philly, I was working at Montgomery County Community College, which had a carrier current FM station— the signal was “broadcast” through electrical lines on campus, so you could only listen over the air if you were on campus, although they also streamed online– and my nephew Derek was a DJ and then a board member at the station. “You ought to do a show, Uncle Max,” he said repeatedly. So I took him up on it, and was initially just using my full name as my on-air name, but Derek and other students at the station kept calling me Uncle Max, so I adopted that as my air name. I’ve never been sure if I liked it, which is why, now, I say “I’m Max Shenk, the DJ known as Uncle Max.”

Go forward another fifteen years, and for various reasons I was back in Carlisle. WDCV was still on the air, and I noticed that it had a lot of open airshifts. College students didn’t seem to be interested in shows, and many of the airshifts were filled by community DJs. I missed doing a weekly show, so I approached the station, gave them my experience and credentials, they said “great, come in for training and you can go on the air,” and a week later, I was in the studio, getting “training” by a student younger than half my age on– get this– the same audio mixing board that I’d used at the station in the 70s and 80s!

I did a weekly two-hour show on Thursday mornings from 7-9 (or was it 6-8?) and then after about a year, moved back to Vermont. And while I was in Vermont, I missed doing a weekly show… and I thought “Why not do it as a podcast?” So I started doing a one hour show as a podcast for friends. Meanwhile, though, WDCV was still airing repeat broadcasts of my old shows in my former timeslot! I contacted the station and said “you know, I’m doing a show as a weekly podcast; if you want, I could format it for broadcast and you could air NEW shows of mine instead of repeats from 2017.” They said “great, do it,” and so every week on WDCV, you get a new show.

Past playlists could give you an idea of what to expect, but why do that? As I say so often on the air when I’m not sure what track to play next, “let’s be surprised together.” But I’ll try to post the weekly playlists (and corresponding promo memes) on this blog going forward as soon after the show as I can.

I hope you’ll listen in and that you like what you hear.

LINKS AND INFO REDUX:
New shows air every Thursday and the podcasts are available on Sundays, usually by noon eastern time.

LISTEN TO THE PODCAST: Link to the current week’s show as a downloadable mp3 podcast (320kbps, 137 mb or thereabouts)
LISTEN TO THE LIVE STREAM: Link to WDCV FM’s online stream (my show airs on Thursday mornings at 7 am eastern time)
PLAYLISTS starting with the Thanksgiving 2022 show
PAST SHOW LINKS AND PLAYLISTS in the Uncle Max Radio Show Facebook group

And finally, you can support the Uncle Max Radio Show financially by becoming a sponsor— either a one-time donation or a sustaining (recurring monthly) donation in any amount. Either way, you get a sponsor shoutout on the show. Or you could just buy me a cuppo coffee.